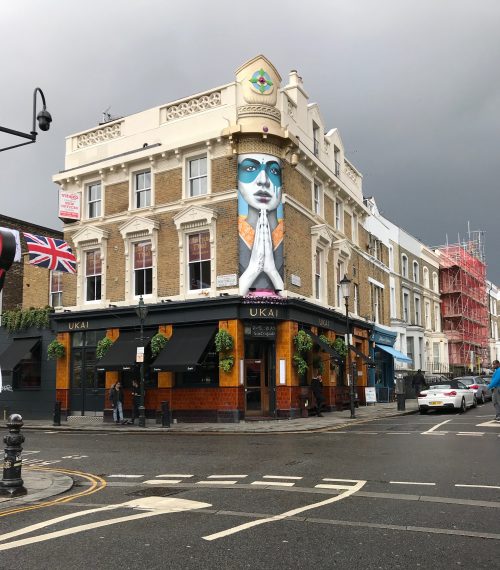 The Juice Bar Adventure... and NOPI

Our first full day out we decided to explore the city by visiting a well-rated pressed juice bar – a staple part of our daily nutrition – and get there via subway, or the “tube” as Londoners call it.

The place we found had really good ratings and was located right around the famous Notting Hill neighborhood.  What could go wrong?

As bona fide LA drivers, who rarely use any other mode of transportation, apart from the exceptional Uber, it turns out learning the London subway system is a serious task.

With a whole lot of bumping around and general confusion in the underground transport system, we worked our way through a maze of subway lines and tried to figure out the directional alphabet. Somehow, we got off at the right station and proceeded to our destination on foot.

We were getting close, we thought, as we passed a dingy biker’s hangout… but after a few more blocks we realized the building numbers were getting away from us… so we went into reverse.  Heading back to where we came from, we watched the numbers count back closer to our juice bar address. Lo and behold, there we were – right in front of the biker dive we hurried past a few minutes before … I’m sure you’ve guessed by now that it looked nothing like its online counterpart. yes, the age of virtual reality is upon us.

Well, since we were exploring, we decided to go in and have an ‘experience’.

The staff was  nice enough, inviting us to sit down at one of the 3 available spots in the joint, after removing a biker’s helmet from our table.  And the juices came out within 5 seconds of our order, which was certainly not enough time to press’ them through a machine. All forgivable… except for our front row seat to a local street gang character who entered the bar raging and looking to relieve his state through some violent altercation.  We just sat there, blindsided tourists.

All’s well that ends well, and that’s all that needs to be said here.

Actually, towards the end of our sit down, we met a tourist-friendly biker who enthusiastically directed us towards the famous Notting Hill neighborhood where the movie was made…living on a 24/7 production site in Tinseltown we weren’t as excited as he was, but we trotted in that direction enjoying the quaint streets and European culture.

In the second part of the day, we explored the area around our Leicester Square flat and found the Middle-Eastern inspired NOPI, award-winning eatery of the famous Jerusalem-born chef-restaurateur Yotam Ottolenghi, whose book “Plenty” we discovered several years back.

Lana went in and made us a reservation for the following evening.