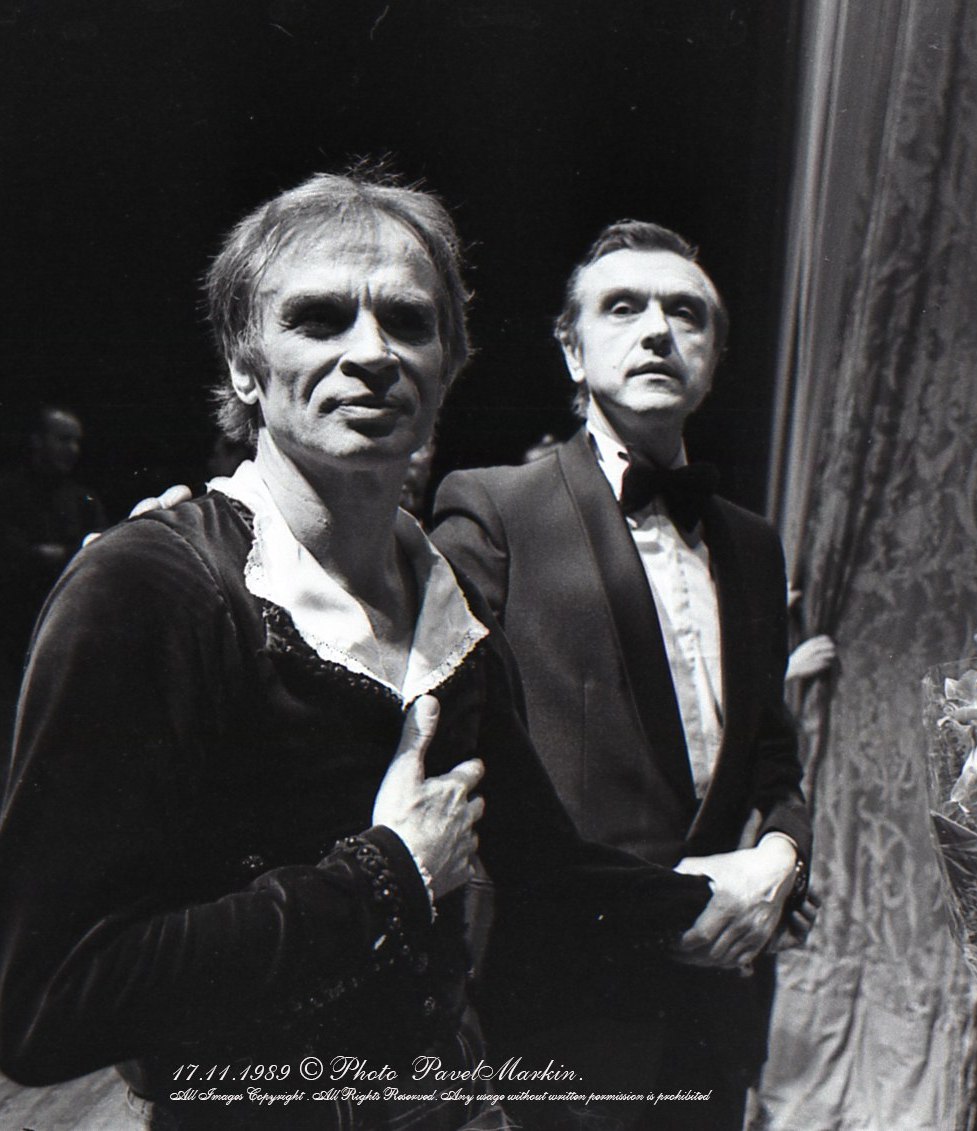 Inspired by ballet writer Elizabeth Kaye’s experiences with the great artist, I got the ball rolling on “Nureyev Enters our Life”. Now, former Mariinsky dancer and Ballet Master Anna Korotysheva is keeping track and keeping me posted on the exposition taking place this month at Russia’s St. Petersburg, Museum of Theatre. Here’s my next translation of what’s happening there!

The exhibit “Rudolf Nureyev. The Last Visit” has opened at the Museum of Theatre  – featuring the work of famous photographer Valentin Baranovsky, chronicling the final visit of Rudolf Nureyev to St Petersburg in 1989.

At the festive opening, Valentin Baranovsky gifted the Museum of Theatre and Music with the album “Rudolf Nureyev. The Last Visit”, placed in the center of the exposition.

The photo documentary of the famous dancer’s triumphant return to his home stage of the Kirov (Mariinsky) Theatre – this is a genuine and accurate document amidst legends and conjectures which accompanied Nureyev throughout his flamboyant and turbulent life.

This side of Valentin Baranovsky’s work became especially important for Oleg Vinogradov – Artistic Director of the Ballet Troupe of the Mariinsky (Kirov) Theatre from 1977-2001, who himself organized the visit of Nureyev to Leningrad.

Opening day, Oleg Vinogradov, with cutting fervor, evaluated the work of the photographer and chronicler of the Leningrad-Petersburg ballet:

“Valentin Baranovsky – a great artist-documenter. He has taste and understands our profession, in contrast to many current photographers and camera operators.  He feels the still plasticity of classical ballet, which is concentrated in seconds and minutes. During any rehearsals, whoever is present – Baranovsky is always there.  He shoots a lot – he’s a worker, he’s interested, this is his life.”

Of his classmate from the times of Vaganova Academy, his friend Rudolf Nureyev, Oleg Vinogradov remembered this:

“When I traveled abroad with the dance troupe of Kirov Theatre or by myself, as choreographer, we met with ‘defectors’ Natasha Makarova and Rudolf Nureyev, but, of course, in the hush-hush from soviet authorities. This escapade came with makeup, wigs, it was no joke. I never thought that I would be able to arrange the arrival of Rudolf to Leningrad.  But it all happened elegantly and gently, Petersburg style.

Rudolf was a professional of the highest caliber.  At one point he showed me his schedule: there are 365 days in a year, and he has – 340 performances.

He would go on stage sick, even in a cast, but the public did not want their tickets refunded. Rudolf felt his partners astonishingly, working carefully with each one. In 1989, he was already very sick and the parts of the main (ballet) repertoire were beyond his strength.  We decided to perform ‘Sylphide’, but even in this production there are two challenging variations.

Rudolf said: “I will die after the diagonals.”  I would answer him: “Don’t exert all your strength in the dance, for us and the public what matters most is your artistry encapsulated in this role, your interaction with partners.  The fact that you will appear on your home stage is enough for us.”  And his performance in ‘Sylphide’ was a triumph.

A while back, when the stage of the Kirov Theatre was being broken up for reconstruction, I took one of the old wooden decorations and brought it to Rudolf.  He took it everywhere with him.  And in 1989, after the performance, after the bows, Rudolf returned to the dressing room (I followed him to help): this piece of the Kirov stage lay on the table.